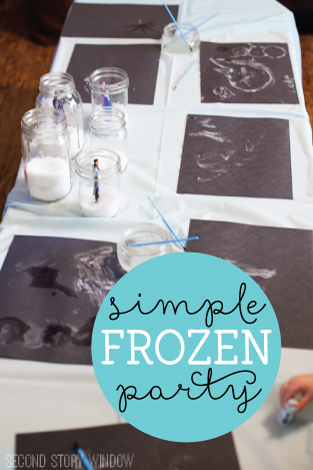 There were a couple of things I felt strongly about when I was planning the activities for Addie’s Frozen party. I wanted all the activities to be developmentally appropriate for the kids at the party. I didn’t want there to be winners and losers. And I didn’t want there to be a lot of “waiting around for my turn” time because that’s when kids get bored and out of control.

With those principles in mind, I put together several Frozen inspired activities that the kids could play with freely. It was so fun to see how they would all gravitate to one activity but then slowly move off to different activities. They all did each to the activities a few times, based on what interested them the most. 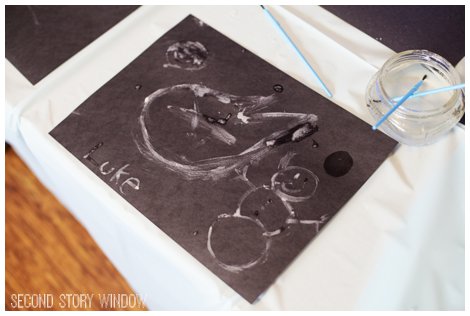 As the kids arrived, I had epsom salt painting out on the table for them to do. I tested the paint before they arrived and it definitely did not work so I made another batch. This time it turned out a little better but we found you needed to use a lot of the paint to get a good results. I would try this out ahead of time if I could do it again! Even so, the kids enjoyed it and it was a nice calm activity to start off the party while the kids warmed up to each other. I got the idea for this here. 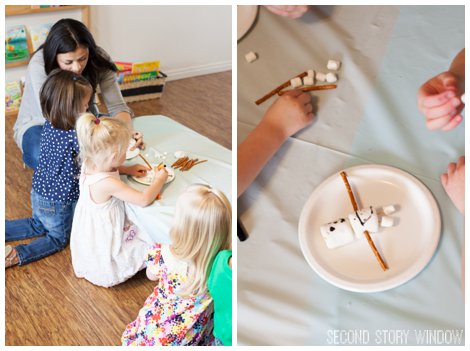 Idea from here. We tried to keep this simple and just included two sizes of marshmallows, pretzel sticks and food-safe markers. The results didn’t look much like Olaf but ya know what, the kids loved it. And many marshmallows were consumed. We did use toothpicks to attach the bodies together but you could use frosting or something. 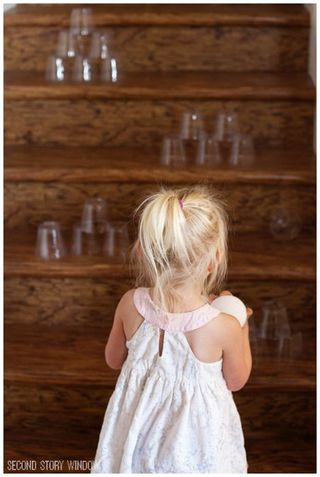 Idea from here. We used styrofoam balls and clear plastic cups for this game. Instead of taking turns, anybody could go over and do it whenever they wanted. Once all the cups were knocked down, they helped put them back up. And having this on the stairs was perfect because the snowballs bounced back to you for your next turn! As you can imagine, this was a hit and so simple!

Do you know Magnatiles? They are the best building toy around. We LOVE ours. And so did our party guests. We put out the Magnatiles to build “ice” towers and they worked together to make some really awesome creations. I was going to only put out the blue and purple ones to seem more “icy” but then I thought, oh who cares! 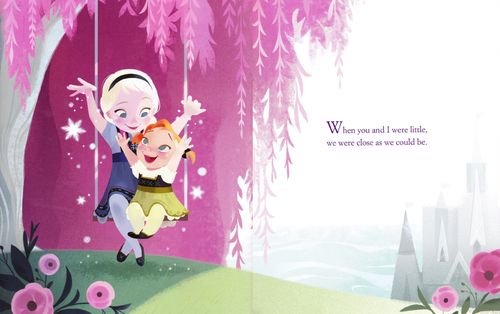 Before presents and cake we read the Frozen book A Sister More Like Me. The art work is AMAZING. Such a fun book! 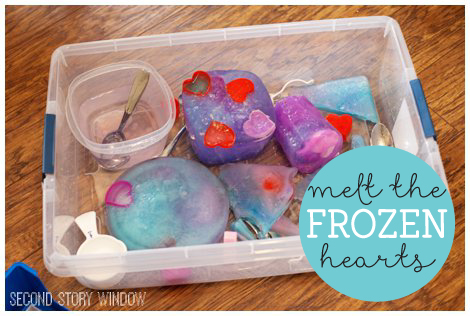 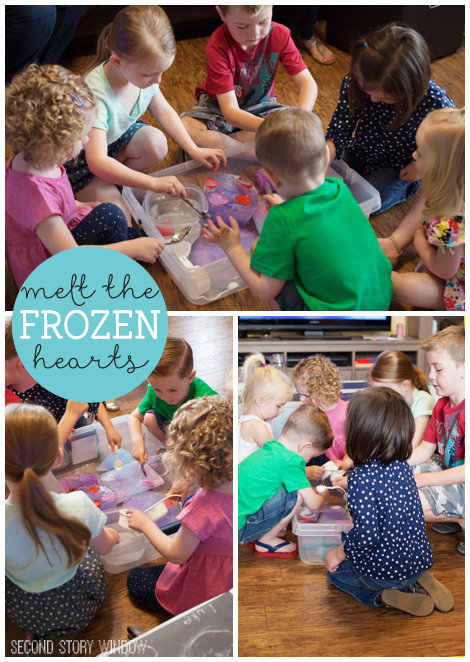 I knew I wanted to do an ice excavation activity but wasn’t sure how to tie it into Frozen until Heidi had the brilliant idea to freeze little hearts into the ice. (Get it. Frozen hearts??) Heidi used some food coloring to color the water and then froze the water in layers, adding hearts throughout the process so they wouldn’t all float to the top and freeze there. She used plastic heart shaped containers leftover from Valentines Day. The kids used water to melt the ice and break out the hearts. They absolutely LOVED this. The fun thing about it was that the kids could work together and they were so excited when they would “free” one of the hearts. They kept coming back to work on it more throughout the whole party. 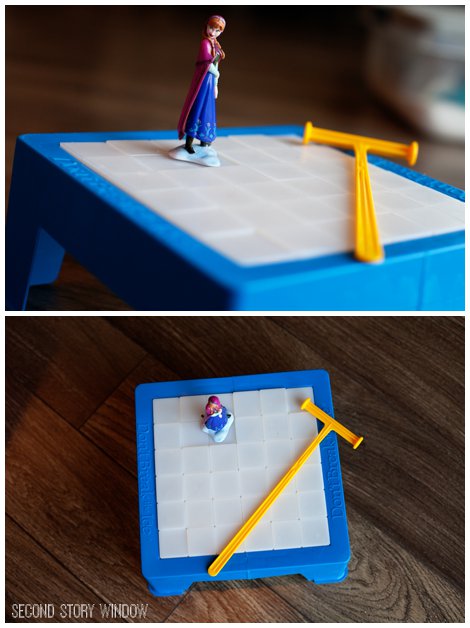 This was another of Heidi’s brilliant ideas. She suggested we play Don’t Break the Ice but use one of the Frozen characters on the ice. So easy and the kids loved it! We didn’t make them follow any rules or take turns too much. They would usually go back and forth one or two times and then just go nuts knocking all the ice out and laughing their heads off. The only drawback is it’s a bit of a pain to put the ice back in. The kids could help though and we had enough parents around to help put it back together. 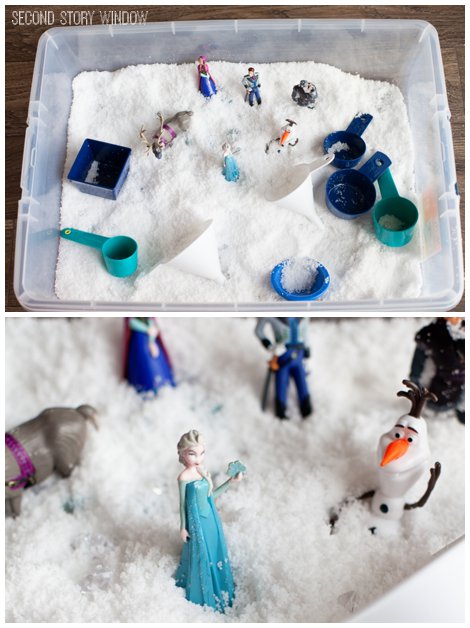 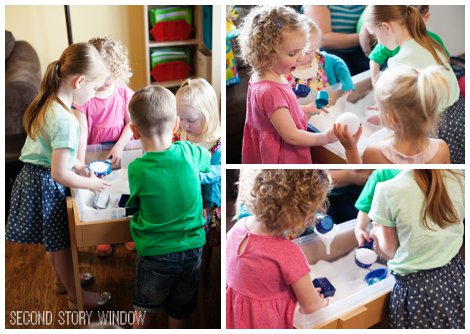 I knew I wanted to have a sensory bin at the party but didn’t want it to actually include ice since we were already using ice for another activity. I saw the idea here to buy Instasnow and that turned out to be perfect. It’s easy to make (and pretty cool to watch, actually.) We didn’t even use the whole container and the bin was plenty full. We put in some Frozen characters, blue glass marbles, “ice” crystals and measuring cups and the kids thought it was awesome. Addie still plays with it all the time. With the lid on the snow has stayed soft for over a month! 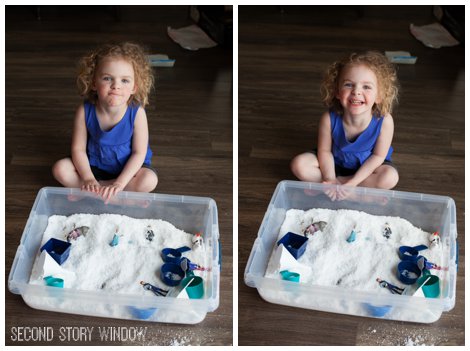 My Sister’s Suitcase has a fun printable scavenger hunt that we printed out and used to hide the hidden favor bags. The kids loved figuring out the clues, since most of them used lines from songs in the movie. 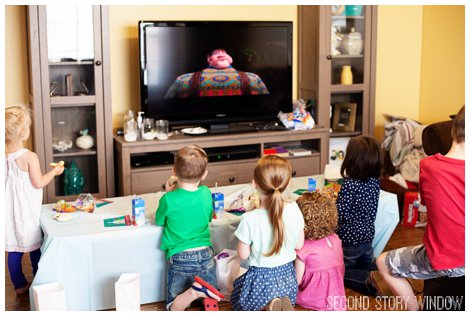 Of course, we wanted to watch a little bit of the movie. I didn’t want to have it playing the whole time but we had it on for a few minutes as the kids arrived and then put it on while they had their lunch and cupcakes. 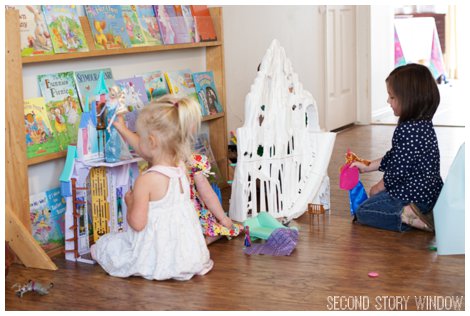 And of course the Frozen castle and toys from the table were a huge hit. We got it all down to play with towards the end of the party and the kids had a great time playing with it!

We were so happy with how this party turned out. The kids had a great time and there wasn’t any fighting or tears. I think most of these activities would actually be perfect for a really awesome Frozen themed play date, too! I hope you got some fun ideas for your own Frozen party!

See Part 1 of our Frozen Party 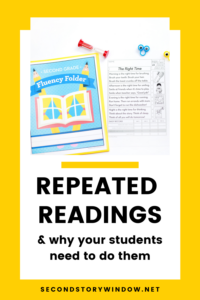 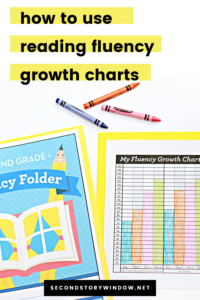 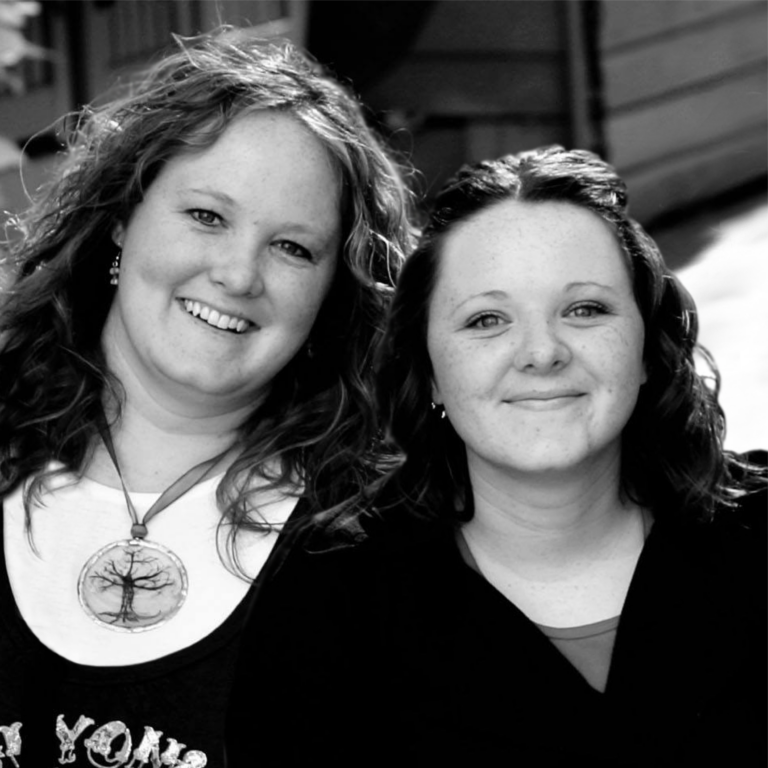